About 6 weeks ago I received a message through Facebook from Lynne asking if I was interested in racing in the relay Champs in July. I had sent an email to the club saying I would like a new experience and replied I would be available.

After transferring my Ennis race entry I was all keen and eager to represent the club in the first triathlon relay event in Ireland.

The week leading up to the race there were messaged flying around the eight of us discussing race order, teams and tactics and we all finally agreed at about midnight the night before the race that the LTC team 1 would be Kirsten, Diarmuid, Carolyn and Aaron in that order. Team 2 would be Lynne, Luke, Elaine and Richard (me), again in that order. 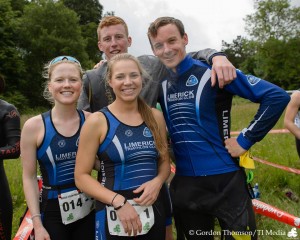 After we found various parking spaces on race day and registered we all eventually found each other, established our bag drop area and felt we were good to go. So after the race briefing we all went to the water’s edge to watch Lynne and Kirsten get in and lead the way.

The start was fast and furious with the Cork team leading out of the water and our two following in second and third. There was a 400m run into T1 and the rest of us lost sight of them from then on as we couldn’t leave the transfer area as we would make a mess of out timing chips. The next time we saw the girls was on the start of their run, not more than about 10m between them Lynne had just stayed ahead of Kirsten and both were charging down and caught the athlete in second place. (Rumour has it that Kirsten took her out on a corner??) Lynne flew into the tag area in second and sent Luke on his way with Diarmuid in hot pursuit in third.

Both lads had a strong swim and again vanished from view until they started their run. Luke had held a great pace on the bike and looked to be flying on the run. Diarmuid came around the corner about 30 seconds later and again was flying. Not sure of the positions but I think Luke handed over to Elaine in about third, Diarmuid to Carolyn in about fifth. His rugby tackle on Carolyn didn’t seem to help but once they untangled themselves she was off like a bullet.

After the 200m run to the water and then the swim Elaine had put in a great performance coming out of her water in second place overall, Carolyn came out in fourth with the third place right in front of her. The next time we saw them Carolyn came past us in second, third and Elaine in fourth not far behind her. First place at this stage was about 2 minutes ahead of us. Carolyn closed the gap to about a minute on the Cork team and handed over to Aaron to begin the anchor leg. Elaine came to me in fourth place about a minute later and I was off.

On my own experience I can now tell you what the course was like. Having seen the athletes coming back from legs 1-3 the transfer area could be best described as a war zone, men and women passing over to their team mates and collapsing in a heap gasping for air. This didn’t do me or Aaron any favours to settle the nerves. A couple of comments included Chris Mintern looking worse than when he won HOTW, Luke on his hands and knees for 5 minutes thinking he was about to puke and plenty of other bodies looking half dead trying to recover.

I hit the swim with my heart rate already near max, finding your stroke in choppy conditions was tough but I did manage to close the gap to exit the water with the guy in third. From here on however I started going backwards. He ran away from me on the 400m run to T1. Another 300m to the mount line and he was out of sight so I resigned myself to doing the draft legal bike leg on my own. I got down the hill to the turn point alone but could see the next cyclist hunting me down. This was the only time I saw Aaron, he had caught the leader in the swim and tried his best to drop him on the bike but was unable to on such a short course. Within the next 30 seconds my hunter came past me up the hill like he was on a motorbike. I got out of the saddle and just managed to hold on to him after 10 or so sprint pedal strokes. Woohoo, drafting, this should be easy. Yea right, I clung on, the guy looked back at me three times, could tell I was under huge pressure and as we crested the hill got out of his saddle and left me for dead. Never mind, I got to the dismount line in fifth and eventually hit the 1500m run. At this stage I thought I was about to have a heart attack but pushed on as hard as I could, I got caught by two more teams during my 7 minute run but know I had no chance of holding them off, I think they had springs in their runners or something. I eventually crossed the finish line in 7th, Aaron had come home in second so I think we were all happy with the results for the club.

I have done every distance our sport has to offer and I do believe that this has to have been the most painful. If you look at any of the photos and see the pain on our faces you can see how hard we all worked. This is a level of effort over such a short distance that we never go into and I certainly felt the pressure.

That being said it was a great fun event and the atmosphere and club spirit from all clubs that took part was very special. I am sure we would all do it again and hope that this event develops into an annual outing. There was a wide range of ability there so it is open to anyone interested in having a go. I would quite like to see it develop with age group teams in the future. It will keep these juniors away from the likes of me anyway.

I would like to thank all of my team mates from both teams for the support, my old club the Midland Tri Club for hosting the event and all of the other supporters that gave us a boost on the way around. (Ivan, that is for you) Hope you enjoy the report and it gives you a sense of what the event was like. 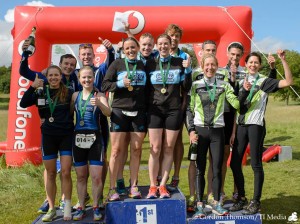 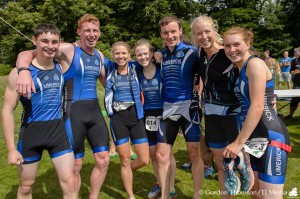