When a family get together was planned for May 2015 in Lisbon, the Lisbon Triathlon became an obvious target race for me and the other swim, bike, run fanatics in my extended family, and I even got a few LTC guys to sign up too. In 2014 I hadn’t done anything longer than a Sprint so was looking forward to doing another middle distance event. Training over the winter had been good – I finally understood that it is all about the bike, and figured out a few things about cadence and gearing. Thanks to Kevin Grant I as running better than I ever had before, although I didn’t actually get to test this out in an event. And although I had cut back on swimming to only 2 swims a week, the S&C and core work from Kevin’s Thursday sessions made me feel stronger. This would be my 4th half iron distance event, so I set myself a realistic target of coming home in less than 6 hours. 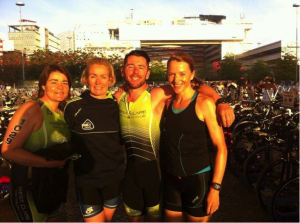 Lisbon is a great city. The race is centered not far from the Airport in Parque des Nacoes, an area developed for the Lisbon Expo in 1998. I had been a few times so figured I would be fine arriving the day before the event. I hadn’t taken into account how much more difficult it is travelling with your children and a bike, so in the end a delay at the car hire and at registration meant I missed the practice swim, race brief and more importantly food – and a hungry Sinead is not a pretty! But once the bikes were in transition the obligatory pasta was eaten and I calmed.

We had an early start as we were staying near at my sisters south of Lisbon, and before you know it its on with the Wetsuit. What struck me from the start was the lack of women entrants – there were a good percentage in the Olympic distance event, but in the Half there were less than 100 women of the 1500 starters.

The swim is in an enclosed lagoon area so a straightforward 2 lap course. In other HIM events I have done its either a mass start, or the women go first, but this time all the 40+ entrants went in the last wave – the swim is my best leg and everyone I knew was in this wave so it would be interesting to see how long before I was overtaken on the bike. The swim went well, and although it was an in water start there was none of the usually physicality and I got away quickly the only issue was swimmers in the wave(s) ahead – I can deal with a front crawl kick, much harder to spot a breaststroke kick coming for you. I had made a few silly mistakes too – It was my first time in the wetsuit since August last year and I didn’t have tinted goggles so couldn’t see much looking into the rising sun. SWIM 00:30

The bike was 4 laps, on a closed dual carriageway. Pretty boring really with 4 180o turns and a long drag at the far end (hill repeats at Birdhill had been perfect training). I was cycling to cadance so just stuck to it and was constantly being overtaken Lenny caught me near the end of the first lap, and my brother Declan on the 3rd. The 4th lap was torturous – the wind had picked up a bit and I just wanted off the bike. BIKE 03:05

The run was tough: different surfaces cobbles, gravel, broken/uneven paths, boardwalk and steps – it really was tight in places. I ran fine to 17km when I guess I bonked. This was much better than all previous HIM, but I did walk 1km there. I probably needed some salt or electrolytes. At the turn for home I had 2 cups of Coke and ran to the finish, giving a 2:01 run.

It was special to have my brother, his partner and my sister out on the course too – I had beaten Declan in Mallorca in 2013 and he vowed never to let that happen again, while Fionnuala did her first ever Triathlon, I am sure she hasn’t left Marathon swimming to the darkside, but she is very proud of her medal! We spent the rest of the weekend with the family to celebrate my Dads very special 75th birthday. 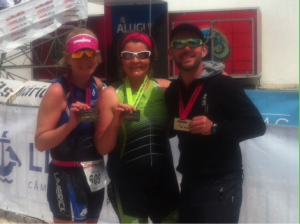 Thanks to John Dempsey, Kevin Grant, Dee Kearney, Lynne Algar and the many others who have taught me so much this year. Huge thanks to everyone in the club for their support and good wishes, and to my husband John  – I couldn’t do it without you thanks.